So once again I have realised just how long it has been since I last checked in. Oops. So in the last month I have realised I am capable of much more than what I am doing at the moment, it’s just one block holding me back. Cantering in the school. Ridiculous. Happy to canter in a field or on the track, but in the school. Nope. Not a chance.

After a firm pep talk to myself I had decided that this has to stop. So I had made a plan I was going to stick to. I was booked in on a clinic initially with Caspie. But decided that to get over this fear Sammy boy would be the man for the job. I know his canter well however he hasn’t been in a school probably for a good decade. But figured if I can get him to canter in the school with him being excited I will be fine.

On the morning of the clinic I was in the zone. Up early, motivational badass playlist on. Sam groomed and shiny and everyone feeling good. When we arrived with Tash & Tamara, Sam was rather excited as expected but it was a bit exciting with all the people, horse boxes and a couple of new horses here and there so fair enough. But true to form Sam took it in his stride and was brilliant.

I mentioned at the start to Mark when he asked us about what we wanted to achieve in the session. I very non comittedly said if he was a good boy I think we should try a canter. Me wimping out of my own grand plan. So toward the half way point of the session Tash and Tamara were asked to canter. ‘Yep, fine we will carry on doing what we are doing’ I thought. Then I heard ‘Jen, I want you to ask Sam to canter…’ I do remember saying oh s**t fairly loudly. Oops children present. Including mine. So embracing the moment I did as asked and it didn’t quite happen straight away, but after a couple of frustrated tries and using Tash & Tamara as target to chase WE DID IT!! IT WAS BLOODY AWESOME AND WE DID IT! Small potatoes for Sam and most people reading, but a blooming great big potato for me.

Still feeling high on life after the clinic on Saturday and a day helping out with friends at their ODE on Sunday. I Felt after dropping off my son at school today would be the day Caspar and I would go for it in the school. Eek! So. As last time the playlist came on during the journey to the yard. I took a few deep breaths and pretended I was badass. Thankfully there were no spectators otherwise it probably wouldn’t have happened. But once again, WE DID IT!! Right rein – lovely. Rocking chair loveliness. Left rein – matey boy next door decided to mow his lawn the attention was more on that than with me perhaps. So as we started to canter he was a little distracted with his head up so as I asked to trot we still went around in canter. Which is fine but as I am learning his lovely canter which at this point felt was pretty bouncy on the left rein (more likely due to my nerves) I lost a stirrup and as my requests to trot didn’t quite happen on time I slid off the side. Not his fault at all. But it’s all part of me learning about him. So after telling him what a good boy he is I hopped back on. It went quite the same way as before but I stayed on and we had some lovely beautiful strides and some ugly bouncy ones. Me again. Whoops. I didn’t come off again so we ended on a high note. Even if I had I would have went around again. Until we ended on that high note.

So enough of my waffle, I am pretty happy right now. So many exciting things to come now that wall is now gone! I am very lucky to have such wonderful and kind horses in my life. Thanks boys! 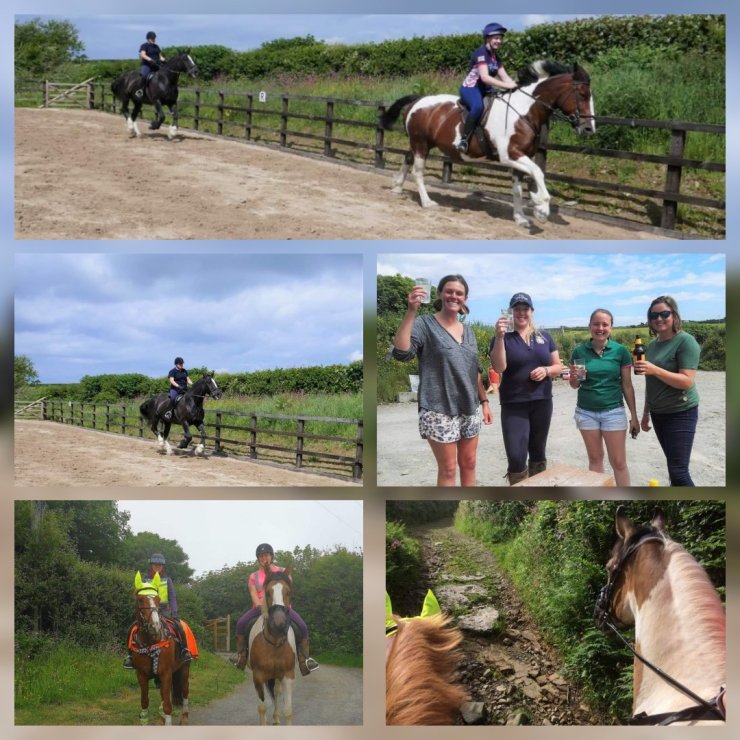